If you have watched the American Sitcom, “Big Bang Theory”, then you probably can imagine how tough it is for smart guys to find a girl. If I were to think and look around, the general theory would be that “smart men” end up dating “dumb girls” and “smart women” usually hook up with “smart men”. 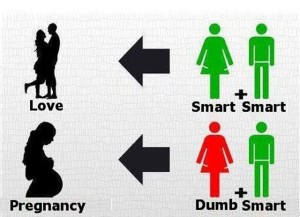 Many of you reading the article might beg to differ and think that we shouldn’t really base some discriminating theory like this as per the sex of the individual. I mean who is to say and judge the intellectuality of a person. So, how do we really decide whether we are intelligent or we are just too self-obsessed to think we are?

If I were to assume that there are equal men and women on earth and if both of them are supposed to date people who are within their IQ range, then there would need to be a balance between the outcomes of IQ of men and women. But unfortunately it is not so and this discrepancy has created a large pool of dumb available guys and smart available women.

We live in an economic world, a world that rewards us for our intelligence. Look around you, in companies, in homes, anywhere, and you will find more intelligent people to have an advantage over those who are not. Majority of the professions need you to be brainy in order to earn a decent living unless you are a stripper.

So, it is only fair to say that intelligent people get to take a call on their relationship as well. They can exit a dating relation or end up marrying someone who is compatible with their career growth.

This brings another angle to the entire discussion; probably dumb women have a higher incentive of trying harder to find smart men to date. They are not financially rewarded for their work in school, or they are not working long hours and do have a leisure time to hunt down smart men and benefit financially from this hookup. So, maybe it’s the dumb women trying to lure smart men into dating them and as they seem like an easy catch, smart men prefer to go ahead with it without spending a lot of time on hunting down smart women.

Although, we cannot rule out sex as an angle here, which can also be one big deciding factor on who ends up with whom. To me it seems that a relation mostly is guided by your mating preferences. Women feel inappropriate to sleep with men of less intelligence as their own and men on the other hand probably would go for just about anybody with a hot body. Honestly, have you ever seen a guy having regret of sleeping with a dumb hot girl?

My personal opinion about dating and settling down is to just have compatibility. Smartness, intelligence and looks are all deceptive terms without any definite lines, as long as both the partners are able to meet the needs of each other, it doesn’t matter who is smart and who is dumb. And don’t people say that marrying is the stupidest act you can do, so probably all of us who marry are dumb, so we are really no one to judge, right!