Can You Change a Man? 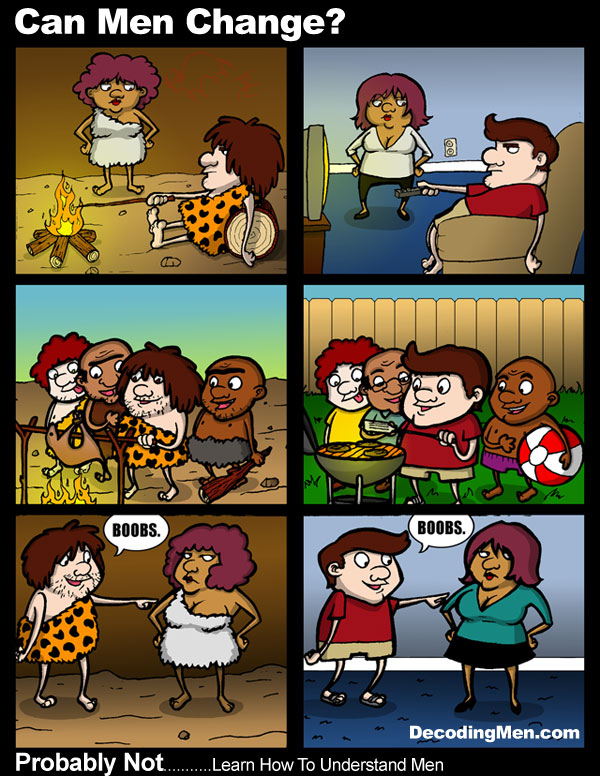 One word and the entire article can be summarized, NO. You simply cannot change a man and this is not only me talking, you have probably heard from almost everyone, even your grandma, “don’t try to change a man, if you want to be happy then just let him be”. Still we all try to make futile efforts of changing our man. Even I have tried many times with a very little success rate. I wanted my man to be more social, less flirtatious, more understanding with my emotions, less jealous of other guys, more responsible and what not. I kept telling him that I want him to change, but like banging your head against the wall, he didn’t budge even an inch. It created a certain level of distance between us. He got back at me and made himself more distant from me. End result, all we were left was with a vast gap of in-differences and frustrations.

Many women find themselves in similar situations; they love their men a lot but cannot stand certain things about him. They don’t want to leave him but also don’t want to be with him unless he changes. So they keep trying to force their men to change and when they are unsuccessful, she feels lost and lonely and tries to look for another comfort zone where she is heard.

Women by nature are picky. They are picky for their shoes, clothes, makeup, hairstyle, food, perfume, jewellery and what not. We can’t help it, this is probably somewhere in our jeans to be so critical and picky for each and everything. Thus, I suppose men cannot fathom what a woman is and often make statements that “they can never understand us”.

I started to think, is it really true that men cannot change or that we are just not making the right attempt?

I was once talking to a girlfriend of mine who recently got divorced. After battling with months of unhappiness and arguments over trying to change her husband, she eventually left him. “Everything I used to say never reached his ears. He did nothing for me”, she said. She concluded that he didn’t love her anymore and thus, was not making any attempt to please her.

Is changing one’s habits and identities, a mark of one’s love and affection for the other? We as women are programmed to be so meticulous that we start to feel that our man should do what we ask him to do and if he doesn’t we prefer to leave him and find someone else who would. Basically, what we want are trained animals who would come wagging their tails whenever we whistle.

Men are a different species from women. They are strong headed and like to live in their own space. When you tell them that they are wrong or that they should change, they will not like it. Believe me when I say this coz I have had many arguments on this.

The unanimous answer was, “We’re animals, we just can’t help but look. We want to have sex with every girl we see in short skirt, but that doesn’t mean we want to have sex in reality. It just means that our brain somewhere is unconsciously ripping that girl’s clothes.”

So can men every change?

Probably no, but I do believe that if approached in a right way, things can be made better. If your man is eyeing another girl, there is no harm, is it? He still loves you but no harm in letting him get an occasional eye tonic. Don’t come on too strong on your man with a big list of do’s and don’ts.

In my opinion, men are in fact more understanding than women. Don’t tell them they are wrong, you do not want to hurt their ego. But if you explain certain things in a proper way, I’m sure they will change. Instead of putting him down by pointing his bad habits, try to boost him. Don’t try to change everything about them, if they were so bad you wouldn’t be dating them, right? Walk half way yourself and change your thinking to accept some of their shortcomings.

If you see a lot of issues, then walk out before anything gets serious. But if you have vowed for a lifetime of commitment, then stick to it and change the way you think about your man. Trust him when he says he loves you and I’m sure strong love will take you a long way of mutual understanding and mutual change. Don’t be his mother by trying to tell him every time what to do and what not to do. No man wants to date his mother.