“Honey, I’m Sorry But I Didn’t Mean What I Said, I Was Just Angry!”

“Darling, I’m really sorry but I didn’t mean the things I said earlier, I was angry and said things without meaning them”. Does this statement sound familiar to you? Probably yes, either you said this to someone or someone said it to you at some point of life. 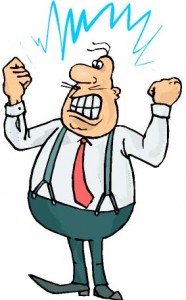 Usually when two people are locked in a heated battle and their adrenaline level is rising high, chances are that they are not going to solve any issue and are likely to say things to each other that are mean and hurtful which they will regret later.

Infact in worst situations, many people end up taking one sentence said by the other person in the heat of the argument, will hold on to it forever and become convinced deep down that “this is how he/she feels for me or else he/she would never say such a thing even in anger”. I’m not sure whether people say the truth in anger or they say things they don’t mean because they are angry, whatever it is, the things said in anger are most of the time hurtful and harmful to any relationship.

You might counter this statement and say that that words thrown out in anger are not from the heart as if it is something that they really felt, wouldn’t they have said it earlier?

But, I think that “I didn’t mean it… I was really angry.” is one of the lamest excuses I’ve ever heard. Anger is no excuse, and using that as an excuse means that perhaps they didn’t mean what they said, but they meant to say it just to hurt you, which as far as I’m concerned more worse.

It is highly possible that we speak things without any meaning when we are angry and we just say those things to hurt someone but still what you say is something that cannot be taken back by covering up with your anger. Besides, isn’t it part of being a full-grown individual to weigh things before saying and to have control on what comes out of your mouth?

Also, many men have an illusion that it is a “woman thing”. It is common to everyone and people get pissed and mad when things don’t happen their way irrespective of gender. We feel bad and angry when we don’t see things happening the way we want, we leash out our anger on the other person coz we just want to hurt that person.

So, if you are at the receiving end and always get upset with things said by people in anger, the key to stop getting hurt is to ignore those things, it can be tough at first but you soon will realize that there is more to what was just said. I have learned this rule and it sure has my life simpler:

Surely, you wouldn’t want to be upset with things said by an insane person. Think about it.