To Care or Not to Care? 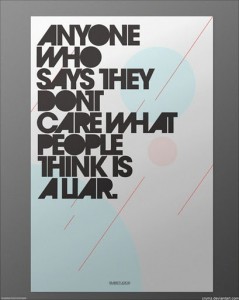 What stops an unhappy couple from getting divorce? What prevents someone from telling how annoying the other person is? What prevents someone who hates his job from quitting? To what extent our actions are based on the worries of what would others think? Eventually it comes down to just one thing, we all want approval from other people. We are not confident about our own lives and we want to make sure that whatever we do, we say, we wear, should be picture perfect in the eyes of the others whether we personally like it or not. If someone says we look amazing, we instantly feel on cloud 9, our self-esteem goes high and we become very proud of ourselves. Approval from others makes us feel confident of ourselves and disapprovals leave us dejected and depressed.

When I was faced with a decision of leaving my office and moving to a new town, I instantly thought, “If I leave, what will I do?” My self-image has been developed by the work I do, it gives me a sense of confidence and motivation to live ahead and so I was worried about what people will think if I suddenly stopped earning money and started sitting at home. I will probably not have the same respect among people as I do now have due to the work I do. I was not sure about what I should do that would not look bad in the eyes of other people. But, I somehow failed to ask myself, “Why should I continue to stay in a situation that was giving me so much stress”. I soon realized that I had to do what was right for me and not base it on what others thought was best. I would accept the responsibility of the action, no matter the outcome. When I was able to let go of the fear of caring about what other people think about and made my own decision, I felt confident. Even if it was wrong, it would be mine and I would be responsible.

I personally feel that there are two types of decision makers. The first are self oriented people who think, analyze every outcome and never discuss with others. It can be because either they have been burned so many times due to other people’s opinions or they are simply over confident.

The second type is of dependent decision makers. These people always require the opinion and approval of others. They would always ask questions such as, “Do you like this proposal?”, “Do you think it will work?”, “Am I right?”, “Do I look nice?” and “Are we doing the right thing?” etc. They are people who are low in self confidence and are unable to move on without the approval from others.

Take for example, you think of a brilliant idea, you say to yourself, “No one else has ever thought of this, I think it will make millions”. You are really excited about it and you go and share it with your friend, he says, “I don’t think this will work, you won’t be able to earn even a dime with it”.

Oops, your face falls drop dead to the ground and your dreams are shattered before even they got started. Before you shared your idea, you were all confident but just because someone else thinks it is worthless, you are now shaky and probably already discarded the idea all together.

The addiction to what opinion people form of you affects you so much that you end up living life as per the terms of what people around you do. If your neighbor’s kid is going to the most expensive school, you also want your kid to go there because you worry about what the neighbor will think if you send your kid to any other school. If your colleague is wearing a branded watch, you instantly want to buy the same or even a better one in fear of being judged by your colleague. For that matter, even the car you drive is based on the opinion of what people on the road will form of you. Other people’s opinion about us matters so much to us that we end up living a life dictated by the terms of society and not the life that we really want.

If I go around and ask people whether they are addicted to this, I’m sure many will reply saying, “no way, we only do what we want to do, we don’t care about people”. If you are also one of them, then try to go to office tomorrow wearing boxer shorts, or go to meet a big client in bus or walk to your boss and say you “quit” or tell your boyfriend that you wish to breakup or go and tell your mom you are gay.

There is only one way to come out of this trap of caring what others think, just stop caring about the outcome. It is hard work to not bother about someone else’s opinion, but trust me if you do achieve that, you would be more happy and contended in life. Someone else’s opinion is not a fact. They judge you negatively only because they themselves are not confident about themselves. Once you let go of this addiction of wanting other people’s opinions, you will realize how unreliable, insubstantial and fleeting their opinion is.

While writing this article, I remembered about a book by a famous physicist Richard P. Feyman who was known for his cheerful approach towards life and a do not care theory for what people thought of him. In his book he mentioned the following conversation:

“Professor Feynman?”
“Hey! Why are you bothering me at this time in the morning?”
“I thought you’d like to know that you’ve won the Nobel Prize.”
“Yeah, but I’m sleeping! It would have been better if you had called me in the morning.”—and I hung up.

Feyman lived a life independent of other people’s opinion which made him live a life full of creativity and enthusiasm. Next time whenever someone gives you their opinion, just think of the words of Wayne Dyer, “what you think of me is none of my business”.