What’s in the Looks?

“I really don’t care what she looks like. She should be a good person by heart. I will love her for who she is and not by her 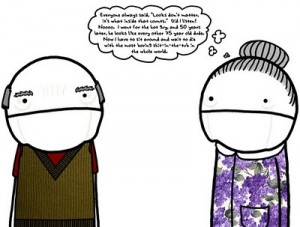 looks”, my friend said while describing about his future wife. Honestly, it sounds all good, after all looks shouldn’t really matter, but is it something we really feel from within or these are merely words to show you are not shallow? We all stared at him and wondered whether he is just saying the big words or he means it really. So, I decided to be blunt and asked him, “Don’t you care whether she is hot?” and guess what, he hesitated and replied, “Well that’s kinda obvious, isn’t it?”

This brought me to question myself, “Do we care about looks so much?” What is it about a human body that we sometimes don’t feel attracted to supposedly the best matched companion and end up falling for the wrong person? In countries where arranged marriage is prevalent, people decide on their spouses just by seeing the photograph which is really shallow but it still happens. An instant attraction to a face is mistaken for love of your life.

Usually the physical attraction we have for someone is related to the body. After all we believe that a human body is God’s creation, so how can we not be attracted to it. So, just loving someone from inside and ignoring the outside looks is not possible. Yes, looks do matter. No one wants to hear, “your soul is the prettiest thing about you, it doesn’t matter how you look from outside”. In my opinion, this is just a nice way of saying, you are ugly. If you think this statement is shallow, then just ask yourself, “What are the chances that I would go on a second date with a girl who is not pretty but fun to be with than the girl who is extremely hot and well I have no idea what she talks, I was too busy looking at her”?

So, to an extent the body of a person plays a big role in attraction but before you go out on a hunt for a girl with the right curves or a guy with the right biceps, you should know that a good body does not necessarily mean the person is right for us.

Can We Be Attracted to Someone Ugly?

To be fair, I wouldn’t be wrong if I said that attraction is automatic. Either you are attracted to someone or you are not. We are attracted to celebrities, models in the glossy fitness magazines, and our preferences are instantly narrowed down to the criteria of beauty of those people. We go to a bar alone in hope of finding a date and our eyes are moving in all directions until it stops at a pretty face. We usually pass by the not-so pretty faces as if they never existed. I know it’s shallow, I wish there were more people who would not judge a book by its cover, but sadly it is the truth. No matter how much we say, looks don’t matter, we are bound by our preferences of attraction which we feel are beyond our control.

But the basis for attraction should go beyond the looks. It should be based on valuing the actual person, body and soul. Couples should be attracted to each other not by the color of their skin or eyes, but by their commitment of valuing the complete person.

I don’t deny the fact that looks are important. Our body is a vital part of who we are but you cannot lay a strong foundation for a long term relationship based on outside looks. Physical attraction for a person should go beyond a perfect figure and should come from valuing the person as a whole.

Not judging a person purely on looks is something that doesn’t come easily. But you can take the first step and convince yourself that a weak first sight attraction is not a permanent situation. If your spouse is very pretty but unfortunately meets with an accident which renders her ugly, would you stop being physically attracted to her?

Every creature is made by God and we have no control on how we look, but we do can change the way we make people look at us and value us. If you know someone who is a potential soul-mate, blends perfectly with your nature, and is the best candidate as your spouse, but you are not attracted, then think again. Don’t let go of your soul-mate just for the looks, welcome the God’s creation with open arms and fall in love with what’s deep inside and not what is on display.